This cake is the second of three cake requests from my friend Sue, who seems to have an unlimited supply of grandchildren with birthdays close together!

The first one was this ‘Dirt Bike’ Cake

And the second one, which was for yesterday is this Jurassic World Cake

The cake itself is 4 layers of my go to chocolate cake, sandwiched together with fudge frosting, and crumb coated with ganache. Once that was set, I applied a second coat of ganache, and smoothed it out as best as I could, ready for applying the sugarpaste.

I started off with white sugarpaste and added some black to make it a sort of marbled grey, then took a smaller piece and made it slightly darker. I added some Tylo powder to this smaller piece so that it would be firm enough to ‘stand’ on its own. I took some Renshaw brown and mixed some white into that to make it lighter, then made the gates and the triangular-ish stones at the side. I used this diagram from a google image search as my guide.

I used a wood grain impression mat and my dresden tool to mark the gates. I also covered a 12” cake drum with green sugarpaste.

The bulk of the grey sugarpaste was then rolled out and used to cover the whole cake. I was a bit concerned about doing this, as I prefer either Renshaw Extra, The Sugarpaste or Select Ireland for covering deeper cakes. I’d almost run out, and ended up mixing what was left with some Renshaw Premium which is a little softer. It actually worked really well 😀 And wasn’t too hard on my hands for kneading!

For the logo, I took the remaining darker grey, and attached an icing image, before cutting around it. I left it draped over the tin I baked in, so it would have the right ‘curve’

I only paid £1.79 for two images, so it was well worth it to get the perfect look, which would have been difficult to achieve in sugarpaste! I’ll leave a link below for where I got it. The seller does lots of different images, not just Jurassic World!

I added the covered cake to the board, and while I was waiting for the sugarpaste elements to dry a little, the airbrush came out to play 😀

I started with the board and gave it a light spray of green, just to add some shading, then did the same with the cake but using black this time. Finally, I airbrushed the top in blue.

Going back to my now dry-ish sugarpaste gate etc, I applied them to the cake with some edible glue. As a finishing touch I used my nifty nozzles large grass tip to make a semi circle at the front of the cake. This gave me something to put the lettering on 😀

I also piped some ‘grass’ on top for something to keep the three toy dinosaurs in place. Et Voila!

I’m really pleased with how this one turned out, and as an added bonus, Sue and Mick stopped for a cuppa and a catch up when they came to collect it 😀

Wilton leaf green from this set 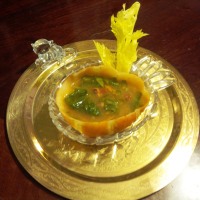